Publication: Revising the timing and causes of the Urgonian rudistid-platform demise in the Mediterranean Tethys 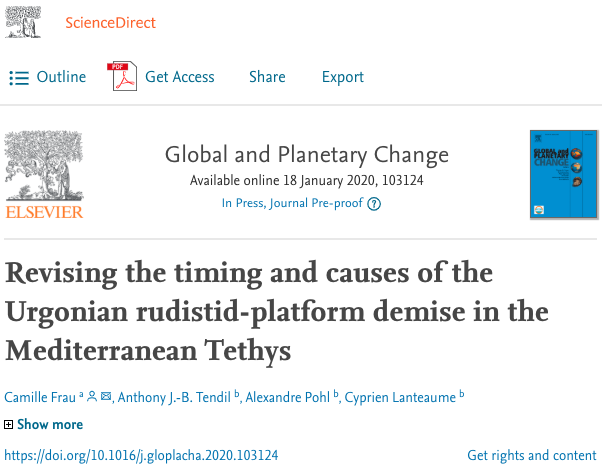 The widespread demise of the Urgonian rudistid-platform ecosystem in the Mediterranean Tethys was so far considered as a progressive phenomenon starting at the Barremian–Aptian transition and culminating in the mid-early Aptian in concert with the Oceanic Anoxic Event (OAE) 1a. The re-assignment of the final demise of the Urgonian-type peri-Vocontian rudistid platforms to the latest Barremian by means of ammonite biostratigraphy forces us to rethink the chronology of events and underlying causes. Re-examination of the best-documented platforms of the Mediterranean Tethys supports a large scale demise of the Urgonian rudist-dominated platforms in the latest Barremian, as demonstrated directly by ammonite occurrences and indirectly by correlations. In most cases, the last rudistid sequences, dominated by caprinid rudists of peri-Vocontian affinity, are topped by an exposure surface. Regional investigation reveals that the duration represented by the exposure surface depends on the regional geodynamics. While the hiatus straddles the middle part of the M. sarasini Zone (latest Barremian) in subsiding platforms, it is of greater duration in quiescent tectonic context spanning the upper M. sarasini Zone up to the D. forbesi–D. deshayesi zones interval (late early Aptian). This exposure event is estimated to have lasted at least 1 Myr and may have resulted from a high-amplitude relative sea-level fall. It is here suggested that a short-lasted, global cooling phase and associated glacio-eustatic sea-level fall may have interrupted rudistid-platform ecosystem in the latest Barremian and subsequently led to hiatus development.

Frau, C., Tendil, A.J.B., Pohl, A., Lanteaume, C., 2020. Revising the timing and causes of the Urgonian rudistid-platform demise in the Mediterranean Tethys. Global and Planetary Change (in press).